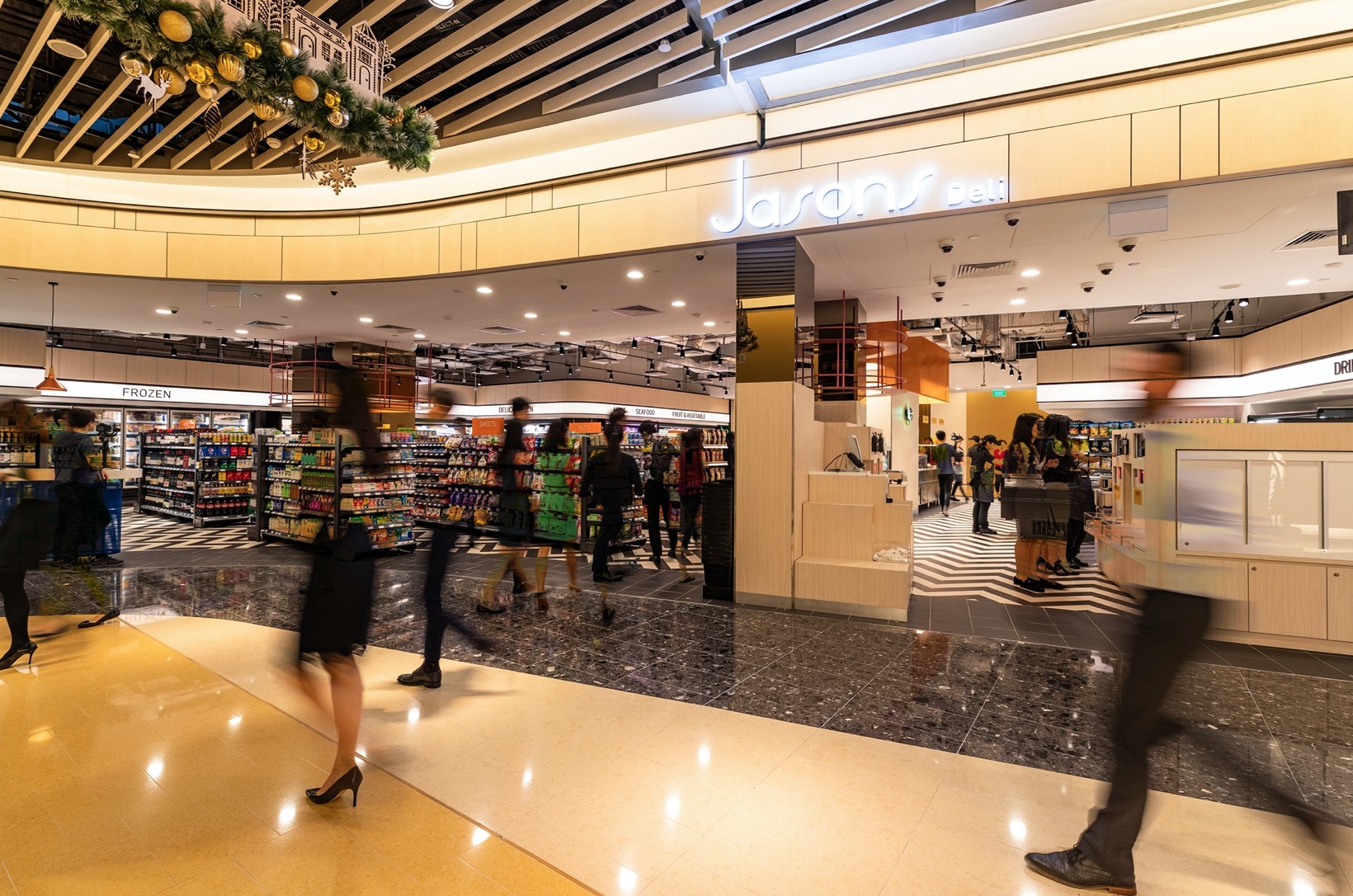 In mid-2018, the Dairy Farm Group, which manages supermarket chains like Cold Storage and Giant, engaged design consultancy firm Savant Degrees to conceptualise a new space in the Central Business District, which was considerably smaller than its existing stores. Using Design Thinking, the team optimised the limited space for retail, designed the space for a lean manpower team, and developed a new brand concept – Jasons Deli – in just 195 days. Their efforts helped the store to reap profits within three months.

Challenge
In land-scarce Singapore, it is getting increasingly harder to find 20,000 square-feet of space for a typical supermarket, especially in the city’s downtown. So when Dairy Farm Group secured a 5,000 square-foot retail lot at Marina Bay Link Mall (MBLM), the challenge was to optimise the limited space for business.

A second challenge was the manpower crunch. Hiring enough staff to run a supermarket efficiently was getting tougher in Singapore and a creative solution was warranted.

With these challenges in mind, Dairy Farm engaged a design consultancy firm – its first time doing so in Singapore. Prior to this, they had followed a fixed formula to maximise floor space. In the design brief to Savant Degrees, the outcome for “Project Blank Canvas” was left open. The key was to use Design Thinking (DT) principles and processes to come up with a new concept that was driven by customers’ needs.

Solution
Project Blank Canvas ran from May to December 2018 and took just 195 days.

From May to September, Savant Degrees implemented DT methodology across five sprints. Each sprint took about two weeks and had its own set of specific activities and deliverables – from stakeholder interviews and research to branding and prototyping of store concepts.

Key to the project’s success was commitment from leaders and the 20-person team handpicked from various departments for this “secret” project. These were employees with the expertise and extensive experience in setting up new stores – ranging from IT to logistics and marketing. David Goh (then-Managing Director of Cold Storage & Giant) and Dan Leonard (then-Operations Director of Cold Storage) also requested for Benhardi Susanto, a team lead, to be attached to Savant Degrees.

Methodology
Ethnographic observations. The DT process began with observing shoppers in the store’s vicinity across weekdays and weekends (during breakfast, lunch and dinner) to gather insights on their purchase and lifestyle habits. Surprise finding: While the store is in an office building, there were children there on weekends, which meant it had to also cater to families.

Engaging customers. To validate and flesh out their findings, Susanto conducted over 20 face-to-face interviews with staff from DBS – a major tenant in the building – as well as phone interviews and focus group discussions.

Ideation and Prototyping. From the insights gathered, the team further brainstormed feasible ideas that would make business sense. (See section “Response to insights gathered”) To test what worked and what didn’t, the insights were translated into prototypes and tried out on-site on shoppers who fit the target demographics. Their feedback was then taken into account to fine-tune the concept.

Business viability. At the tail-end of the ideation-prototyping process, the concept was assessed for commercial feasibility. Challenged by constraints, the team achieved a lean manpower count and a selling floor to storage area ratio of 90:10 due to creative use of space, like overhead storage.

The team working on Project Blank Canvas would prototype their ideas, such as smaller self-service counters made with cardboard, and test them out at Cold Storage branches. © Dairy Farm Group

Outcome
The first Jasons Deli opened at MBLM in December 2018. Within two months, the store broke even. And in the third month, they were making profits.

The fully self-service checkout system not only improved the customer turnaround time by 50 percent but also staff productivity – thus making better use of its lean team.

A full self-service store, Jasons Deli has a “fast lane” near to the checkout counters for shoppers who simply want to grab and go, as well as a “slow lane” for those who prefer to browse and discover items. © Dairy Farm Group

“Even after the opening, new insights from customers helped us to fine-tune the range of products and even store layout,” says Store Manager Susanto. As a result, the store’s year-end performance for 2019 saw a 30 percent sales growth in the third quarter over the first quarter, and 10 percent above sales budget in the second-half of the year.

For the pioneering team, the results are heartening. Fong Yoon Chyi, a Marketing Manager who was involved in all three store openings, says, “Those of us who were part of this project understand the DT process so if we’re involved in future stores, we can champion this approach.”

Guided by DT principles and values, the team found creative solutions to tackle space constraints, staff shortage and reduced basket size. Zi Huan Wee, Managing Director of Savant Degrees, says “the outcome could have been very different if the insights had taken us down a different path – it was all driven by putting the customer first.”