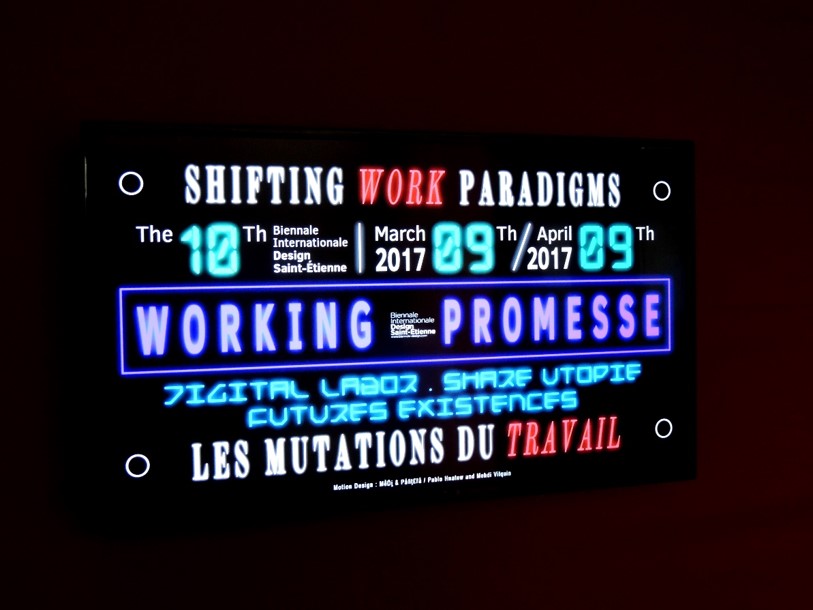 The Biennale Internationale Design Saint-Étienne 2017 will present a state of the art and a great experiment, a giant laboratory, entitled Working Promesse focused on the shifting work paradigms.

Work is one of the major preoccupations of our society. For us all, work generates income and status; a promise of emancipation and prospect. Offshoot of the dream of a generalised full-employment, work is at the heart of political and economic attentions, but at the start of this 21st century, it is changing and transforming. From digital labour to the share, the world of work is being reshaped; it is inventing new organisations, new services but also new throes and new hopes. Designers, companies and the Saint-Etienne territory will gather in 2017 around this thematic in order to confront perspectives, ideologies, innovations and desires. And it is with the participation of the public that we will work towards this promise.

For this 10th edition of Biennale Internationale Design Saint-Étienne, UNESCO Creative Cities of Design will represented by the invitation of Detroit as Honour guest and a special programme linked to the network.

Several calls for projects are linked to the Biennial: