This second edition of the Cultural and Creative Cities Monitor shows how well 190 cities in 30 European countries perform on a range of measures describing the “Cultural Vibrancy”, the “Creative Economy” and the “Enabling Environment” of a city.

These three selection criteria were used to refine the list from about 1000 cities in Eurostat’s Urban Audit database (with a minimum of 50 000 inhabitants) down to 190 cities on the basis of their demonstrable engagement in the promotion of culture and creativity – being included in the Cultural and Creative Cities Monitor is thus in itself an acknowledgement of these cities’ efforts in this domain. By applying these criteria all the capital cities of the 30 countries are automatically included in the Monitor.

Among the city ranked there are a lot of UNESCO Cities of Design such as Berlin, Bilbao, Budapest, Dundee, Graz, Helsinki, Kaunas and Torino.

The quantitative information is captured in 29 indicators relevant to 9 dimensions reflecting 3 major facets of the cultural, social and economic vitality of cities: 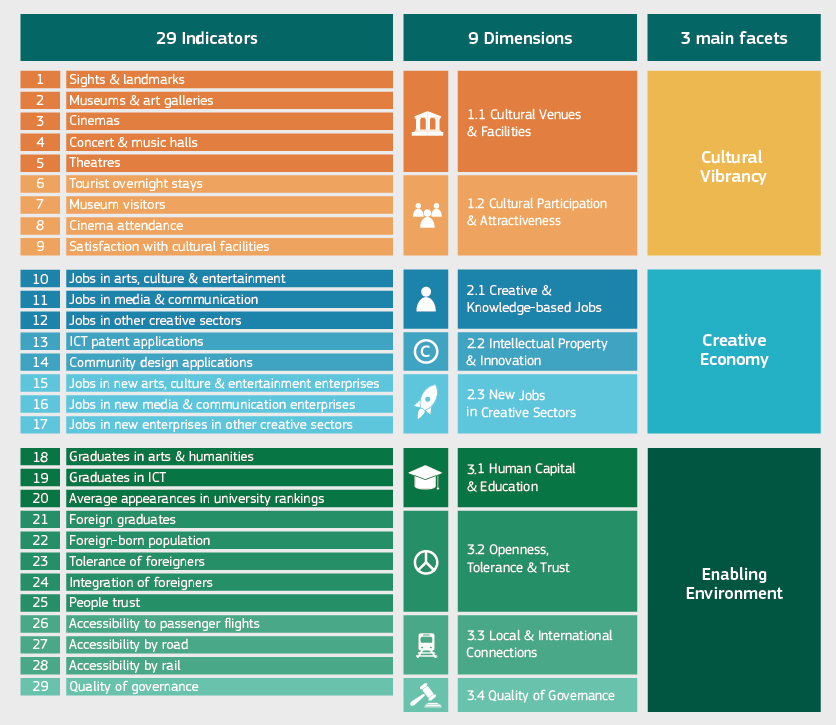 The Cultural and Creative Cities Monitor is designed to help national, regional and municipal policy makers identify local strengths and opportunities and benchmark their cities against similar urban centres using both quantitative and qualitative data. The Cultural and Creative Cities Monitor is thus an instrument to promote mutual exchange and learning between cities. For researchers, the pool of comparable data is expected to generate new questions and insights into the role of culture and creativity in cities’ social and economic well being.

Find out more here and see how each city was ranked!