With 500.000 inhabitants, the metropolitan area of Saint-Étienne is the 2nd urban center of the big metropolitan hub in our Rhone alps Region. Saint-Étienne was an industrial city from 19th century centered on coal mining, metallurgy and the manufacture of cycles, arms, machinery and textiles (trimmings). These are the roots of design. Economic crises in the second half of the twentieth century forced the city to develop new economic axes and new competitiveness centers (mechanical, medical, technologies and textiles, surface treatment, optics, machinery), higher education and design. With its remarkable history allied to industrial modernity, Saint-Étienne, land of creators and inventors, is a constantly changing city, driven by a dynamic linked to the arts and industry. Saint-Etienne gives to culture a predominant place, festivals and events programmed by all the stakeholders contribute to the cultural prestige of the city (Museum of Art and Industry, Museum of Modern Art, Mining Museum, Le Corbusier Heritage in Firminy, etc …)

The urban transformation process in Saint-Étienne started at the beginning of the 1970’s.Saint-Etienne has begun a metamorphosis launching  an  urban project and the realization of great architectural  buildings. The Cité du design was founded in 2005 by Saint-Étienne City and Metropolitan government, was born from the strong development of design education, and the success of the Saint-Étienne International Design Biennial. Located on the site of the former Royal Arms Manufacture, the Cité was inaugurated in October 2009, in an avant-garde space designed by Finn Geipel and Giulia Andi. It is a platform for observation, creativity, teaching, training and research through design. The Cité du design and the Saint-Étienne Higher School of Art and Design are part of the same structure, and work towards a common objective : to develop research and innovation through creation.

The City of Saint-Étienne and Saint-Étienne Metropolitan government have defined a strategy for action which uses design as a structural tool in economic, social and cultural development. The aim of their strategy is to design an innovative, attractive territory with a stimulating, high-quality living environment.To implement this policy, they have created a design manager position acting across their services. The design manager aims at raising the administration awareness on design and developing the integration of design within the procurement contracts.

In 2010 Saint-Étienne became the first French city to join the UNESCO creative cities network as city of design.Thanks to concrete initiatives such as the creation of the Cité du design and the International Design Biennial, Saint-Etienne has adopted design as an agent for urban transformation and for economic development. Relying on the creativity of its territory and the engagement of both the public and industrial sector, the city is reinventing itself, leading its numerous small and medium-sized enterprises to innovation, and improving the quality of its citizens’ urban living environment through design.

11000 entreprises (the highest concentration of SMES in France)

Museum of Modern and Contemporary Arts

Museum of Art and Industry 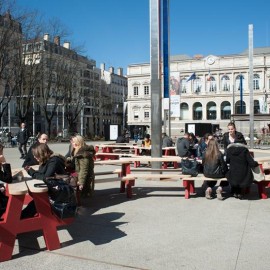 END_OF_DOCUMENT_TOKEN_TO_BE_REPLACED

Driven by the city of Saint-Étienne, the only UNESCO Creative City of Design in France, and by Saint-Etienne Metropolitan Government, the Biennale Internationale Design Saint-Etienne,…

Mobility of the future – Automotive Workshop

In 2017, during the Biennale Internationale Design Saint-Étienne 10th edition, the contest “a  Streetcar  design for design” students from all over France was organized. Given the success…

The Cité du design Saint-Etienne has been appointed by the French Government to coordinate the national programme “Assises du Design” (Design Assembly). Initiated by  the…

Game designers have been existing since thousands years. But with the development of videogame, this sector has been flourishing and the discipline of game design…

Captain Ludd designers in Conference INCLUDE 2019

Saint-Etienne and Detroit have initiated a strong cooperation since 2019 , especially on the field of social design and urban regeneration. As Detroit will host…

10 things to know about Saint-Étienne (PDF)

City du design
Back to All Design Cities
We use cookies to help us improve, promote, and protect our services. By continuing to use the site, you agree to our cookie policy.OKMore Information